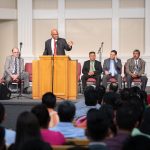 Hispanic ministry in the United States is growing and maturing. The 2019 Pastoral Retreat had an attendance of eighty people. Spirituality, brotherhood, and generosity marked the environment.

Twelve students graduated from Spanish Bible Institute this year—seven for pastoral ministry and five for spiritual enrichment. Three are pastors, and the others are local workers in their respective churches. At the end of the graduation ceremony we commission those who surely feel God has indisputably called them to pastoral ministry. This year Brother Noah Vasquez and his wife Miriam felt God leading them to Arcadia, Florida, where they started a church in October. In June thirty alumni met for a time of fellowship. From this convocation came a couple and a brother who made a commitment to start a church in January.

For the past twenty-four years, the Hispanic youth retreat has been one of the foundations of Hispanic ministries’ success. This year more than 180 young men and women with their respective leaders and counselors met, and God’s presence became real. The youth sought the Lord. We are strategically planning to disciple, mentor, and cultivate these young people for the greatest spiritual and ministerial impact possible.

The Southern District camp is the oldest and most successful ministry of US Spanish Ministries. This year one of the graduates of our Spanish Bible Institute, Pastor Ovidio Martinez, was the evangelist. Praise God for victories won!

God blessed US Spanish Ministries this past year. A church was established in Indianapolis. A field was opened in Anderson, Indiana. Nineteen courses of Shepherds Global Classroom’s international holiness curriculum were translated and edited, and the last course is in progress. We are videoing courses so they can be used by extension.

Looking ahead we are exploring open doors in Naples, Florida; Oklahoma City, Oklahoma; Cincinnati, Ohio; and helping HIM Latin America start a work in Tabasco State, Mexico. Our Spanish Bible Institute continues to thrive. Additionally we are talking to Hobe Sound Bible College about the possibility of offering advanced theological studies in Spanish. God is working in the world—in our world—and we praise Him for it.

~Sidney Grant, Director of HIM US Spanish Ministries