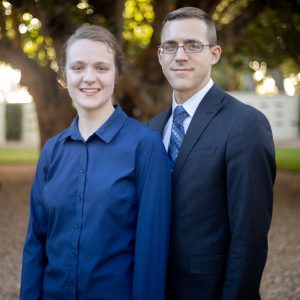 Having been raised in a conservative Christian family, missions was not new to Shane. As a matter of fact, missionary stories made up a large percentage of his childhood reading. His passion for languages, interest in other cultures, and love for travel combined with the amazing stories of those who answered the call of God to serve overseas, put a desire in Shane’s heart to become a missionary.

Shane gave his heart to the Lord at the age of eleven. A desire to serve the Lord in full-time ministry grew until he reached the age of eighteen when he felt God specifically called him to mission work. He didn’t know where, how, or when, but Shane knew he was committed to following that call no matter where it led.

Missions was also a big part of Danae’s growing up years. Being raised in a pastor’s home, she had the opportunity to interact with different missionaries who visited or stayed in her home. She also learned about and prayed for orphans who were her same age. For many years, Danae was part of a children’s club that had a strong focus on praying and learning about missions. As part of this club, she was encouraged to write to different missionaries. The return letters she received served to greatly spark her interest in missions. Over the years her love for other cultures and her desire to minister cross-culturally continued to grow. The Lord used these things to show Danae that this was the call He was placing on her life.

Shane enrolled at Penn View Bible Institute in 2012, and Danae followed a year later. There they both prepared for mission work. In the fall of 2016 Shane completed his final internship in Honduras with Eric and Hannah Kuhns. It was there God began speaking to Shane about the open door and the need. The Lord confirmed how the passion He put in Shane’s heart for teaching and mentoring fit with the need. Shane answered the call for service to Honduras in the area of pastoral training and teaching. Danae had come to Penn View with an interest in Hispanic missions, so that spring she graduated from the Hispanic Missions division. As God began to bring Shane’s and Danae’s hearts together, it was exciting to see how God had already begun to prepare their path and had brought their callings together.

In II Timothy 2 Paul told Timothy to entrust the things he had been taught by training faithful men who would be able to teach others. This would enable the gospel to be faithfully passed down from generation to generation. In many ways, a true pastor is the heartbeat of a congregation. He is the shepherd, the teacher, the counselor. For the ministry of church planting to go forward successfully, it is essential that faithful national pastors are raised up from the congregations and that young people are trained to take places of leadership in the local church.

Shane and Danae’s ministry goal is to train and mentor those who are already pastoring as well as lay the foundations for Biblical education for young people across the Hispanic world. This equips them to pastor, preach, teach, and evangelize in their own communities and throughout the Latin world.

A Note from the Walters

“Thank you for your prayers and support as we go to tell the story most precious, sweetest that ever was heard!”