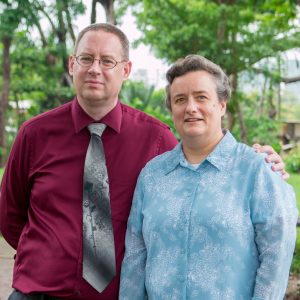 When Byron was a teenager, he clearly knew that God wanted him to work with Chinese people. He thought he was on his way to China, and so he obtained a Bachelor of Arts in English from what is now Malone University in Canton, Ohio. He was certified by the State of Ohio to teach at the secondary level. In 1999, he graduated from Carson-Newman College with a Master of Arts in Teaching English as a Second Language.

Melissa also felt the pull toward missions as a teenager. She did not have a specific call, but firmly believed that her husband’s call became her call when she married. Byron and Melissa were united in marriage May 13, 1994.

On the evening of September 6, 2000, they arrived in Taiwan to begin what they thought would be years of teaching students at a Christian college in Chung-li. God had other plans, and after two years they realized that God wanted them to make a change. While trying to find God’s will, they made a personal trip to the southern part of Taiwan in the spring of 2002. One of Byron’s friends from graduate school invited him to attend church with her. They discovered that she attended a Bible Holiness Church affiliated with FEA ministries. The pastor was soon to return to America, and as Byron walked up to the building that morning, God told the pastor that Byron was his replacement. There were several obstacles that God had to remove, but a few weeks later they were approved as FEA missionaries to pastor the Kaohsiung Bible Holiness Church.

God wonderfully blessed their ministry over the next five years. When they returned to the States for a furlough, it was decided that they would move across town and pastor the other Bible Holiness Church in the southern part of Taiwan when they returned to Taiwan in 2008. Much of what they do is the same as any pastor in the US, with the added blessing of doing it among some of the friendliest people in the world. The climate and food are also wonderful blessings.

After a few years of ministry at the Tsoying Bible Holiness Church, God gave Byron a three-part vision for what needed to be done at the church. The first step was to organize the church by writing a constitution and bylaws. The second step was to buy their own building in order to have a permanent location. This was accomplished in 2016. They moved into an eighteen floor office building in a different district in the city, so the name of the church had to change. When they moved in August of 2016, the Tsoying church ceased to exist and became the North Kaohsiung Bible Holiness Church. The Manners are currently working on gaining official government recognition for the church and returning money they borrowed from several in the congregation. The last step of the vision is to find and train a Taiwanese couple to take over and lead the church.

Since moving into the new location, North Kaohsiung Bible Holiness Church has experienced tremendous growth. In two years, around twenty new people have been added to the church. Many of these were already believers when they came, but several have been baptized and joined the church. Some Sundays the auditorium is full, and people have to sit in the hallway leading to the auditorium. The church may have to add a second service to accommodate this increased attendance. However, Byron is beginning to dream of buying a room directly across the hallway in the building where the church is located. The owner is willing to sell, and the church is saving towards purchasing it.