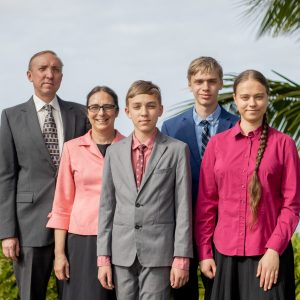 Valera and Maude Motovilov along with their three children—Zarina, Alexander, and Nicolas—are HIM missionaries to the Czech Republic. The Motovilovs have been working with HIM since 2006. They first spent nine years in Russia pioneering a new work right in Valera’s hometown. Then in 2015 they answered a call for help from the field of South Africa.

After they spent three years in South Africa, God closed the doors for them to stay there legally. As an answer to prayer, Valera and Maude got in touch with some of the church leaders in Czech Republic. God was opening a new door, promising many exciting opportunities for ministry in a country that, just like Russia in the past, suffers from the anti-God ideology of communism. In October of 2019, they started missionary work in Prague.

From the very beginning, they set a goal to learn the Czech language and to find ways to work not only with the Czech people but also with the Russian speaking immigrants. Valera and Maude, both having teaching degrees, wanted to use their skills to teach English and the Bible. God opened a door for them to teach in a language center and work with university students. They have also been working with the Russian-speaking church where they started a children’s Sunday school class and a Bible-based class for beginners. Valera has the privilege of preaching in the Russian church from time to time.

Thank you for supporting the Motovilovs as they minister in the Czech Republic!