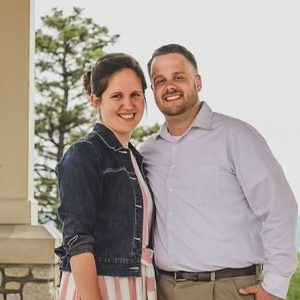 Having grown up in ministry-focused homes, Jeremy and Esther both had a sincere desire to do God’s will. At fifteen Jeremy felt called to missions. After graduating from UBC with a missions degree, he sensed God leading him into education. He then began teaching at Union Bible Academy while earning his masters in education.

Throughout her life Esther always had a desire to work on a mission field using education. After graduating from GBS, she began working at Twelve Stones Christian Academy while earning her masters in education.

Amid planning to go to the mission field, God allowed Jeremy and Esther’s paths to cross. It quickly became apparent their goals and passions in life were perfectly aligned. In the summer of 2021, they were privileged to visit the country of Honduras. In November 2021 they were joined in happy matrimony and now have plans to head to Honduras in the summer of 2022.

Jeremy and Esther have a passion to come alongside the church in Las Uvas, providing them with the aid they need. While pastoring this church, the Hopkins will begin mentoring and providing literacy classes to their congregants who have a desire to read their Bibles and go to the Bible institute. This will help them minister more effectively. The final goal is to see national leaders prepared to pastor the church. With their background and training in education, Jeremy and Esther would also love to plant a small Christian school to offset the desperate need for education in this community.

For the initial six to eight months of their first term in Honduras, Jeremy and Esther plan to attend an immersive language school in the lush mountains of Copan, Honduras. While acquiring the language, they will also be learning the culture. After language school, they will begin working in the church at Las Uvas under the direction of the Kuhns family and begin developing relationships with the people there. The Hopkins’ main goal in life is to “love others closer to Christ.”

In Honduras, Jeremy and Esther will be mentoring new believers and making disciples of Christ. Their passion is to show God’s love to those who are lost and hurting. They desire to accomplish this by implementing intentional discipleship, training national leaders, planting churches, and providing educational needs to the impoverished.

A Note from Jeremy and Esther

“Your prayer and financial partnership in the Great Commission will enable us to fulfill God’s calling on our lives to go and make disciples in Honduras. Thank you for your support!”