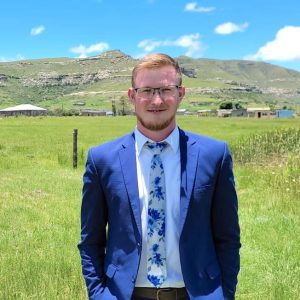 At the age of thirteen Matthew felt a call to missions placed upon his life. He grew up in a pastor’s home and was involved in ministry at a young age. Matthew attended Union Bible College where he graduated with a bachelor of religion with a major in missions. During college he went on several mission trips to Ukraine as well as domestic mission trips.

Upon graduating Matthew knew he was “to go,” but he was not sure exactly where to go. As doors opened, he tried his best to walk through them. By doing this, God has allowed him to visit and preach in four countries in Africa, sharing and teaching the doctrine of holiness. He has spent several months working in South Africa over the last year, holding revivals and preaching in camp meetings.

Matthew is very excited about going to Lesotho to work as a short-term missionary for four months, beginning in March. During his stay there, he will be active in helping with the Eternal Foundation project as well as working with youth discipleship groups. He is also looking forward to helping and being a part of the Africa85 initiative focused on training pastors. Financial needs go along with all these plans, so if you feel lead to support, God bless you.

Matthew covets your prayers for this trip and also for guidance in his life as he seeks God’s will for the future. He is excited for this opportunity but most of all wants God’s blessing.

Thank you for your support and prayers.

Give to Matthew Smith!